Joan And Melissa Rivers Think I’m Being Morbid — Or The Amount Of Morbidness Allowed At The Gilmore’s House!

I have a double reference for you today!

Because twice, the Gilmore girls mention Joan & Melissa Rivers. And they're quite entertaining to look up, to say the least! 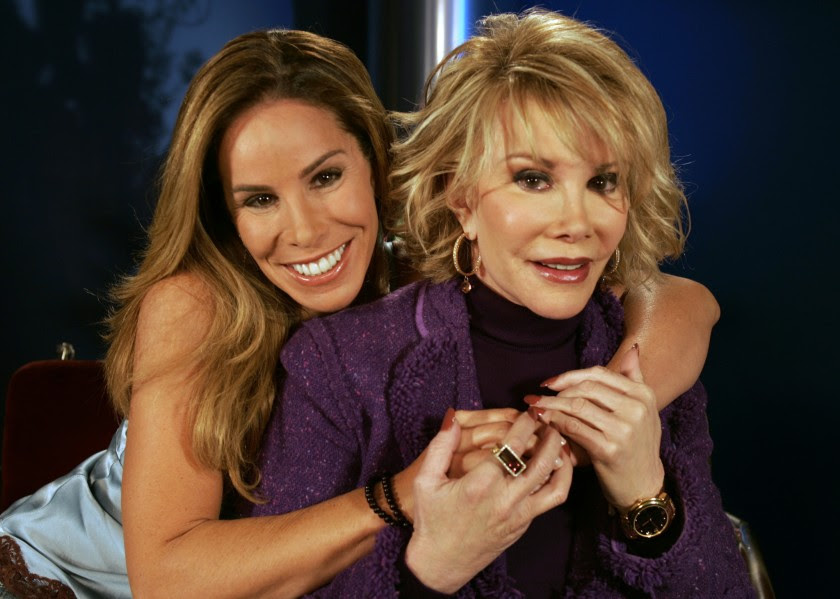 Joan Rivers is one of America's most famous comedians. She had a big career and the whole shebang!

Melissa is her daughter, famous too and they worked on several projects together.

Tears and Laughter: The Joan and Melissa Rivers Story

In 1994, they made a movie recreating their life and the tragedy of losing Edgar Rosenberg, Joan's husband and Melissa's father, by suicide.

But the movie is quite mockable. Here's the Gilmore dialogue to prove it:

RORY: The Joan and Melissa Rivers Story, starring. . .
LORELAI: Joan and Melissa Rivers. A mother and daughter torn apart by tragedy.
RORY: Suicide.
LORELAI: Not getting The Tonight Show.
RORY: Mean boyfriends.
LORELAI: Identical noses.
RORY: You'll laugh, you'll cry.
LORELAI: Because you're laughing so hard.
RORY: It'll be an evening to remember.
LORELAI: And in the pivotal scene where a very distraught Joan gets locked out of High Holiday Services because she's late, I will be forced to rewind it and play it over and over about four thousand times.
RORY: You'll never be the same.
.
.
.
You can watch the whole movie here:

Let me know what you think! 😂

The other time we hear about Joan & Melissa Rivers is when the girls are at the Gilmore's house in season 1, Episode 14. That Damn Donna Reed 👗

Richard & Emily got a house on Martha's Vineyard, like they wanted. But to get it, they had to take advantage of a man's death!

LORELAI: The both of you are going directly to hell, I hope you know that.
RICHARD: Well, at least we'll be well rested.
LORELAI: Touche.
[...]
EMILY: The only drawback of course, is that we had to rent the place furnished, and Arthur had dreadful taste. Remember the library, Richard?
RICHARD: Pink and green! Horrible. Just horrible.
LORELAI: Well he's dead now so he got his.
EMILY: Lorelai, you're being morbid.
LORELAI: I'm being morbid?
RORY: New subject please!
LORELAI: Joan and Melissa Rivers here think I'm being morbid.
.
.
.
That line is because of Joan's long-time mocking of her husband.

When he was alive, he was the source of many of her jokes.

And when he died by suicide, she didn't stop!

This morbid humour and somewhat bad taste is what Lorelai compares to Richard & Emily's opportunism.

There's so much to learn about Joan & Melissa Rivers.

Some good, some bad and some ugly stuff! 😂

For example, Joan obviously had lots of plastic surgery, which she had no problem talking about.

"I wish I had a twin, so I could know what I'd look like without plastic surgery."

Whenever someone's being morbid or has had a lot of plastic surgeries, you can compare them to Joan & Melissa Rivers. See who gets the reference!